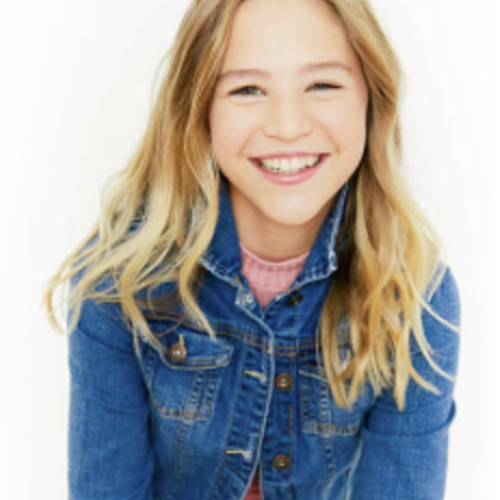 Rebekah is a fourteen-year-old who is passionate about finding joy and spreading hope.

She’s an active member of her community as an athlete, musician, and performer. Rebekah is a field hockey player, runs track, plays clarinet, and regularly graces the stage in school and community musical productions. A self-proclaimed “nerd,” she’s also a Mathlete and a proud National Junior Honor Society member. Rebekah especially enjoys reading and writing, and published her first Op-Ed in the Philadelphia Inquirer in 2019.

Rebekah is also a real-life Marvel Super Hero! She was featured on Marvel’s Hero Project, a docu-series celebrating real kids making a difference in their communities. She was immortalized in her very own comic series, The Mighty Rebekah, making her one of Marvel’s first transgender Super Heroes.

Rebekah’s journey into public advocacy began at 10-years-old when a picture of her holding a sign went viral. With her cute pink pigtails, Rebekah made a bold statement that transgender people aren’t scary at all. They’re just like other people. Now, Rebekah meets with legislators, shares her story with educators and healthcare professionals, and advocates for transgender and non-binary kids. In 2018, she testified before the New Jersey State Legislature in support of a bill that would require schools to include the accomplishments of LGBTQ people and people with disabilities in curriculum. That bill was signed into law in 2019.

Rebekah believes in the power of LGBTQ+ representation in books and media, and she’s currently hosting a book drive to donate hundreds of diverse books to schools, libraries, and organizations across the country.

Rebekah shares her experience in a way that touches hearts, changes minds, and inspires positive change. She’s received awards for her activism from NYC Pride and Jersey City Pride. Her work has been featured by media outlets around the world, including People, Teen Vogue, British Vogue, Good Morning America, ABC Nightline, Girls’ Life, Popsugar, NowThis, Mic, The Advocate, Pride, Tamron Hall Show, Forbes, Good Day Philadelphia, and Good Morning Britain. By being an out and proud transgender young person, she inspires people of all ages and identities to show up fully as themselves and dare to make the world a better place.

When she’s not busy changing the world, you can find her binge-watching cooking shows, hanging out with friends, and hiking with her mom, dad, and two younger brothers.